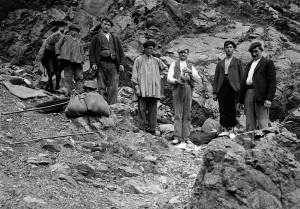 All European countries share a history of emigration (or colonization) and of immigration: we are, or we have been, all migrants. European internal migrations have been huge in the past and still are; the enlarged EU has strong internal population movements; in various European countries young people are migrating again etc.

A bottom up perspective at European population will help to show a trait of Europe that has been vastly ignored and that we believe should not be underestimate anymore in the search for an European unity, that is internal migrations have created (or may create) an European culture and citizenship.

It is therefore our belief that new insights on how to deal with contemporary migrations may come from a confrontation of the various European countries’ approach to regional and country migration history.

The research objectives are :

– To write a history of European migrations from the different areas/countries’ perspectives.

– To analyse Europe’s internal migrations to show how Europeans people have intermingled over time through migrations (economic, forced, refugee migrations should be all included).

– To see how different European countries manage contemporary migrations analysing the passage from country of emigration to country of immigration.

– To examine the new mobility phenomenon, difficult to quantify in a post Schengen era.

Since it is impossible to deal with all Europe’s countries (UE, enlarged, Geographical etc.), not even all the UE countries, we could start from the countries represented in AEMI and integrate the missing information of the countries we think proper to include. Below is a mixed list with AEMI countries, and EU countries I think important to include, but it’s an open list of course.